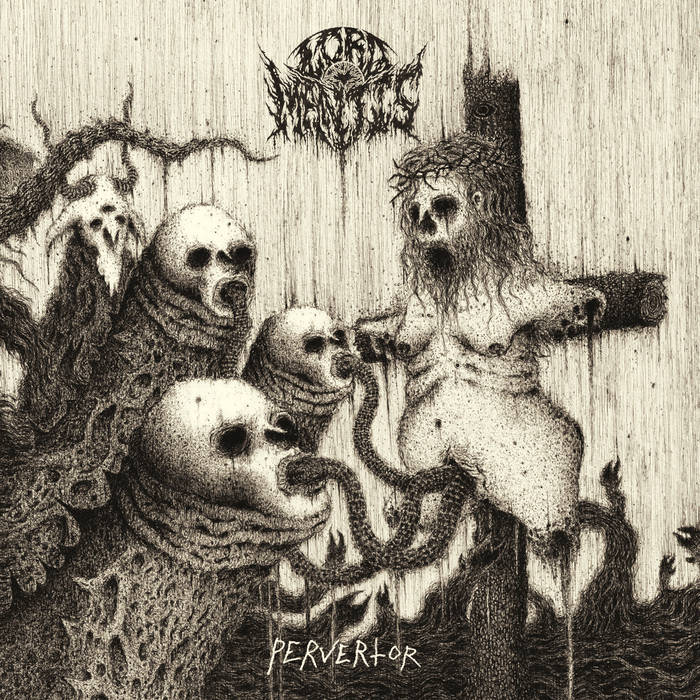 Paul Schwarz Evil sounding record, think Neurosis jammming with a guy whose noiseroc band release disgustingly sick and challenging comics about growing up "hard" in bf nowhere....That's what I do MM! Beastmilk have something in common with this lot - not just because the two could exchange names and pull it off. Or just let LM have Beastmilk like Circle did for Finland's "Incantation." Also is the lyric here "trapped inside LA?"
Favorite track: The Whip And The Body.

These hallways seem endless to me, to you? But I will find you. I can hear the rushing blood, coarse and thick with suppressed shrieks.

The thumps, they speaks to me in primal note of subjugations. Can you hear them? I know you can.

This dance, this trail, it has lasted too long now, you hear. I heard the rattling of the blinds. The door. The hush.

“Pervertor” is the second full-length of Chicago’s Lord Mantis, and it’s utterly monstrous. The ‘blackened sludge’ label they use to describe their music is more or less accurate, but it doesn’t come close to conveying the sickening heaviness of this release. If Converge and Neurosis combined to make some sort of twisted offspring, this is what it would sound like.

“…this band has conjured up an album that is ahead of its time – they have been able to harness pure evil and shape it into sonic torment.” – Cvlt Nation

Edition of 100 tapes
Housed in a screenprinted black denim pouch