by Gnaw Their Tongues & Crowhurst 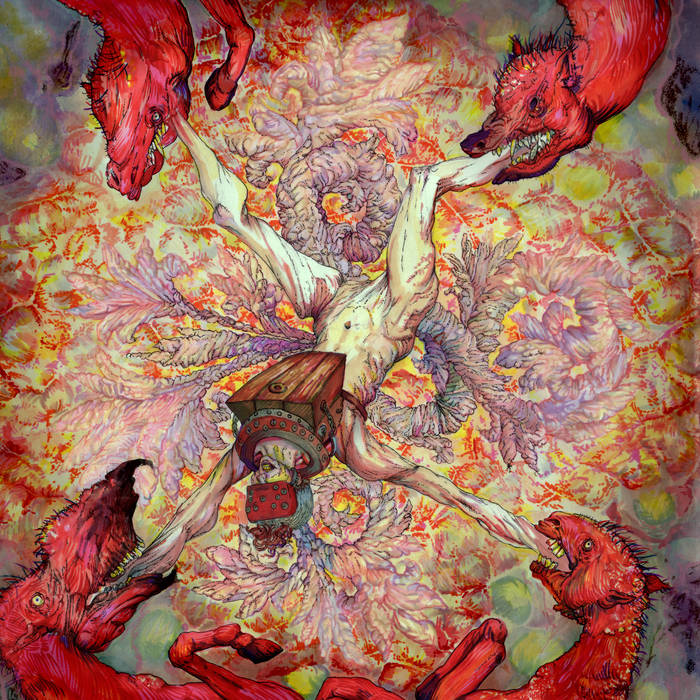 SinderSalmon This album is like if you had an orgasm during a really bad shrooms trip.

It's VERY good Favorite track: The Divinity Of Our Great Perversions.

Crowhurst, formed in 2011, is the project of Jay Gambit, who has created hours of material under the moniker, from noise tapes limited to dozens, to full-fledged albums backed by a complete band and utilizing colleagues and contemporaries such as members of Caïna and Ævangelist. Employing everything from drone to black metal to harsh noise wall styling, Crowhurst is, in itself, a unique body of work.

Gnaw Their Tongues, formed in 2006, is one, some would say most recognized, projects of Maurice De Jong, who plays under a half-dozen aliases in the music world. As prolific as his collaborator Gambit is, De Jong exists in a spot between black metal, industrial noise, dark ambient, and drone that few or none have ventured prior.

"Burning Ad Infinitum: A Collaboration" is a four song behemoth showcasing both musicians' talents both separate and in collaboration. Weaving harsh noise, De Jong's distressed vocal styling, and industrial rhythms, the four tracks becomes it's own unique monster; the combination of two organisms birthing what might be something entirely exclusive in life.

Artwork conceived, as the music, by the duo of Caroline Harrison and Brandon Geurts. Layout by Jay Gambit and N. Constantino Design.

Edition of 100 cassettes housed in a cardstock case

"“Behold, I come as a thief. Blessed is he that watcheth, and keepeth his garments, lest he walk naked, and men see his filthiness!!!”

I turned back to see the voice, that spake with me. And when I was turned, I saw one like unto the Son of man, clothed with a garment down to the feet, and girded about the paps with a golden girdle. His head and hairs were white as white wool, and as snow, and his eyes were as a flame of fire, and his feet like unto fine brass, burning as in a furnace, and his voice as the sound of many waters. I ran from this madman.

One woe is past, and behold, yet three woes came after this.

I ran, again. I stood on the sea sand. I saw as it were a glassy sea, mingled with fire.

One woe is past, and behold, yet three woes came after this." -Johan van Hattum